Since the days of the Republic, celebrations in Venice were not lacking: all served to aggregate citizens around the symbols or events in the city, and whether they are of historical or religious commemoration, we still feel it deeply today. 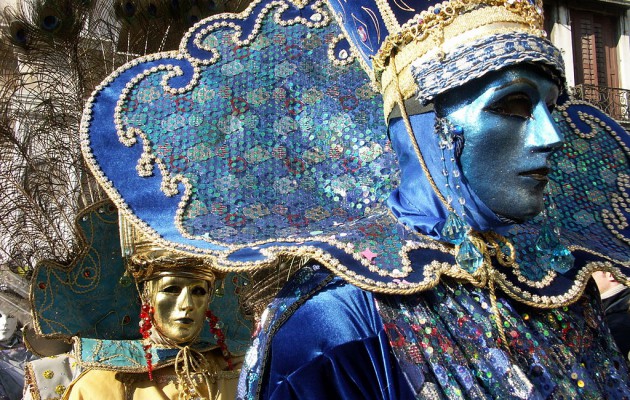 This is the main event in the annual calendar of races “Voga alla Veneta”, unique discipline practiced for thousands of years in the lagoon of Venice, which is now made ​​even more spectacular by the famous parade that precedes the races.
The origins
The race has always involved citizens and “foresti” (in Venetian dialect: foreigners). The first historical evidence date from the middle of the thirteenth century and are linked to the Festa delle Marie, the party from which comes the Carnival, but it is probable that in a city like Venice, always looking on the sea, the race had origins oldest, dictated by the need to train the crews to the oar.
The races
The race consists of various races on particular types of boats: currently the most followed and exciting is one of the gondolas. On the occasion of the Historical Regatta, Venice sees the basin of San Marco and the Grand Canal teeming with boats of every type, from which people attend the competition with animosity.
The parade
Commemorates the welcome given in 1489 to Caterina Cornaro, wife of the King of Cyprus, who gave up the throne in favor of Venice. It is a parade of dozens of multi-colored boats, typical sixteenth century, with gondoliers carrying the highest offices of state in a reconstruction of the glorious past of Venice.
For the official website of the Historical Regatta click here. 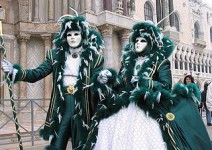 Its origins are very ancient: the first evidence dates back to a document of 1094, which speaks of public entertainment and in which the word “Carnival” is mentioned for the first time. During this period, all the inhabitants of Venice dress up in costumes and masks, except those who dress “normal person who works,” making the damper and not accepting the kisses of the Marilyn Monroe of the moment .. but the spirit of Carnival survives! There are traditional masks, the ones that are on the cards, which are made of paper mache and cover the entire face or just the eyes: these masks are usually combined with traditional costumes of 1700, very colorful and shiny. But the most fun part of the festival is to see the inventions of the guys on the street: men – cow, the White Rabbit running screaming “it’s too late!”, Farmers and Vikings who greet the soldiers of the Empire. All greet each other, laugh, make compliments for ideas and of course: eat and drink!
For information about the Carnival of 2013, click here. 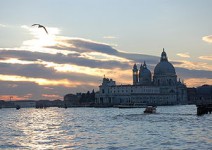 Also this feast, like that of the Redentore, is reminiscent of a terrible plague that struck the city of Venice, this time in the period 1630-31, and the subsequent vow by the Doge to obtain the intercession of the Virgin Mary. The construction of the church, which is located on the Punta della Dogana, was given after a competition to Baldassarre Longhena, who had designed a church “in the form of a crown to be dedicated to the Virgin,” and was finished when the patriarch blessed her in 1687.

Every November 21 is celebrated then the Feast of Our Lady of Health, in which the Venetians across a bridge of boats that start from St. Mark and take to the church, buy some candles and go in procession into the church behind the high altar to pray in front of the Madonna . Traditionally, after being to pray, you can stroll among the stalls selling sweets and pancakes! Along with the Festa del Redentore, is still one of the most popular festivals feeling strongly by Venetian; during this period, traditionally, we eat the “castradina”, a dish made of mutton. 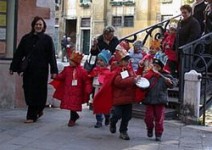 It is narrated that in a distant Nov. 11, in a rainy and cold day, Martin galloped on his horse wearing a warm coat. Suddenly he met an old man on the road covered with a few rags, staggering and cold: the future saint wanted to help him, but being without money or blankets to offer him, took his cloak and with his sword cut it in half, donating a portion to the poor man. Shortly after, while Martin galloped happy to have done this act of charity, the climate warmed and from the clouds appeared a radiant sun: since then the beautiful days that there are in that period are referred to Summer of St. Martin!

In ancient times Venetians celebrate the saint with a long procession ended in front of the Church of St. Martin in the Castello district. Of that procession remains the tradition of kids who roam the streets attracting attention with pots and bells, stopping in front of shops to ask for something as a gift.

The sweets of this festival are great shortbread, all decorated with candies and chocolates, which reproduce the image of the saint on horseback with sword and cloak. 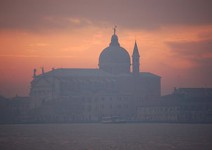 What kind of July would be without the Festa del Redentore?! This event recalls the construction by order of the Venetian Senate (September 4, 1576) of the “Church of the Redeemer” as a votive offering for the city’s deliverance from the plague of 1575-1577. At the end of the plague, in July 1577, it was decided to celebrate with annual effect the liberation from the scourge, with the construction of a votive bridge in the Giudecca Canal.
This celebration is a tradition that is still active after almost five centuries! The votive bridge, which previously consisted of boats tied together, is now a real float bridge that is mounted during the weekend of the festival. As always in Venice, the Sacred is mixed with the profane, and the celebrations are divided into two days. On Saturday, hundreds of boats equipped with large stereos and decorated with colorful balloons, lights and flags, spill over into the lagoon and channels: towards the sunset, all come together in the Giudecca Canal to eat on the boat or on outdoor tables, and wait for the fireworks that lasts from 23.30 besides the Midnight. On Sunday, the tones are more religious, and you can watch the Votive Mass in the Church of the Redeemer, making a rare walk across the bridge from the Zattere to the island of Giudecca; throughout the day are planned races and outdoor shows.
This year the festival will take place on Saturday 20 and Sunday, July 21. 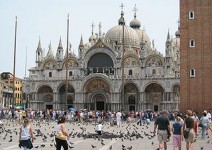 This is the patronal feast of Venice, celebrated in memory of Saint Mark the Evangelist. In our cities, there is a particular custom: men give to the women of their family a red rose bud, that in dialect is said boccolo: at least, one rose in a year!

This custom is said to be born from a legend around 800; a blonde girl named Maria, daughter of the future Doge Angelo Partecipazio, was strongly in love with Tancredi, a troubadour very brave and beautiful. The feeling of the two young people was opposed by her father, because he would not allow such a marriage. Mary, therefore, asked Tancredi going to fight against the Arabs in Spain with the army of Carlo Magno, and cover himself with glory: doing this way, the father would not be more opposed to their love. Tancredi left and the fame of his glorious deeds spread quickly around the world. One day, however, arrived in Venice some Frankish knights led by the famous Orlando, found Maria and spoke the death of the gallant troubadour. He fell at Roncesvalles bleeding over a rose, but before he died he had caught a flower and prayed Orlando to want to bring it to his loved one. The girl took the rose with the color of his blood and remained locked in her pain. The next day, on the feast of St. Mark, she was found dead with the bloody flower on her heart. Since that time, the bud of rose, symbol of love that is about to open to life and to the sun, is offered to women in the days of St. Mark.


Warning: Use of undefined constant php - assumed 'php' (this will throw an Error in a future version of PHP) in /home/customer/www/sweethomevenice.com/public_html/wp-content/themes/shw/footer.php on line 1